Hey there everyone! I’m Dan from Uncle Jack Simulations, and today i’m very excited to announce our first ever payware project: Fairchild’s Primary Trainer 19, also known as “The Cradle of Heroes”!

This aircraft was essential for the proper flight training of WW2 fighter pilots. This was meant to be a warfighter’s first contact with a flying machine. Many who flew it perished during battle, later. Many became living aviation legends. This is truly the Cradle of Heroes!

Not many PT-19s are currently airworthy, and it’s just sad to see such an important piece of human history just gather dust and…fade away.
With that in mind, Uncle Jack decided to preserve this magnificent aircraft in all its glory, with all its quirks and features, so it may digitally live on in our virtual skies for present and future generations of pilots to enjoy the thrill of Open-cockpit flight!

Some of her key features:

– TrueVintage aging system: We honestly couldn’t settle for designing her “Factory new” or to actually aim for some worn out and currently airworthy iteration of the aircraft, so why not have both?
With TrueVintage, you can feel the aircraft getting older as you fly her! Not only its systems get wear and tear depending on how you fly, but also physically see the the aircraft accumulating dust, leaking oil, getting its dope varnish crackled down, and the occasional bug splatters on the windscreen. Take care of your airplane by calling “Jerry”, your personal mechanic, and arranging the repairs needed. If you want a crisp aircraft on the outside at all times, you can absolutely keep her shiny by ringing Jerry! If you just want her to work properly, with proper maintenance, but want to preserve the bird’s old looks, you can rightly do so! All default liveries will support TrueVintage, and the plan here is to offer livery makers coverage as well!

– In-depth simulation of the  Fairchild Ranger L440C-1 engine: From startup to engine cutoff and maintenance, this engine breathes life! Get to know this amazing piece of machinery very well, since it’s this 175HP fella that will get you places safely! Cater to its needs by regularly getting some fresh oil in, watch as it will burn up residual oil when it first starts up for the day, and watch out for any oil that may have fallen down the cyllinders, since this engine is actually INVERTED to give pilots more visibility from the cockpit!

– Built for VR from the ground up: There is nothing like pumping your wobble pump while also keeping an eye out for that pressure gauge! Oh yeah, let’s not forget about hand cranking your starter, that’s aviation workout at its best! The Fairchild PT-19 was built for VR. The thrill of Open-Cockpit flight, in a high quality aircraft, in VR, is one of the things that pushed this project into reality (or should i say virtual reality? No? Okay). Expect every interaction and menu to be as intuitive as possible while inside VR! Of course the plane will work just as fine in 2D, in case you were wondering

– PBR materials and FMOD powered sounds: Texture work is crisp, in 4K resolution and using state-of-the-art PBR materials. Performance and 4K textures are balanced to give this bird the best of both worlds! Sounds in this aircraft are everything when it comes to immersion, so expect to HEAR your engine telling you signs that you are pushing it over its limits, or maybe a rusty screw will show signs of wear and tear. This aircraft is as organic as it gets, so don’t think the engine sound is a dumbed-down mp3 of nonstop humming: You have sounds for each piston, you have sounds for a healthy engine, but also for an oil-depleted combustion. Keep close attention to the orchestra that plays under your hood, and master it!

– For every skill level: DON’T WORRY! Things sound tricky, or you just don’t want to follow the documentation and simply want to press some buttons and fly away? Call Jerry and off you go! He’ll set your bird up for you in no time, and even lend you a helping hand during startup! Now, on the other hand, if you want to take your time and do everything just as it should, we give you the tools to do so! No one gets left out!

Here are some Alpha renders of her! 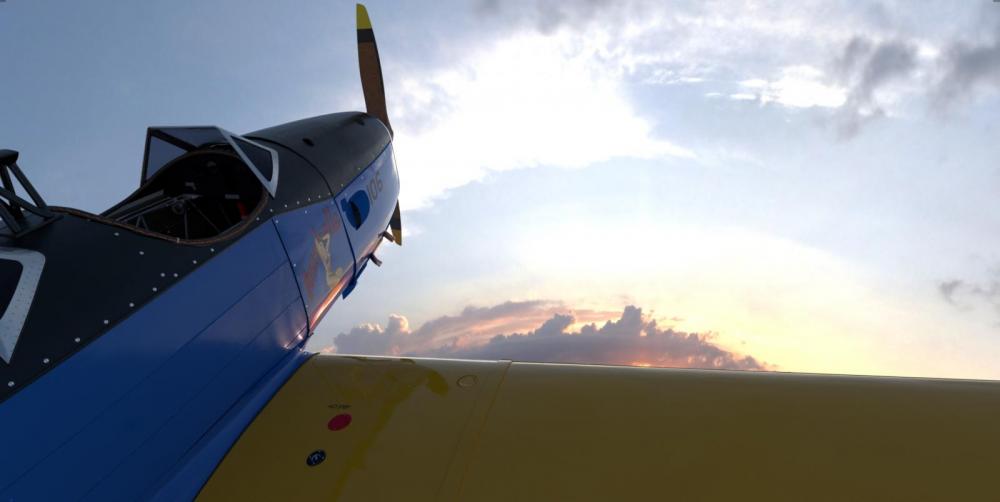 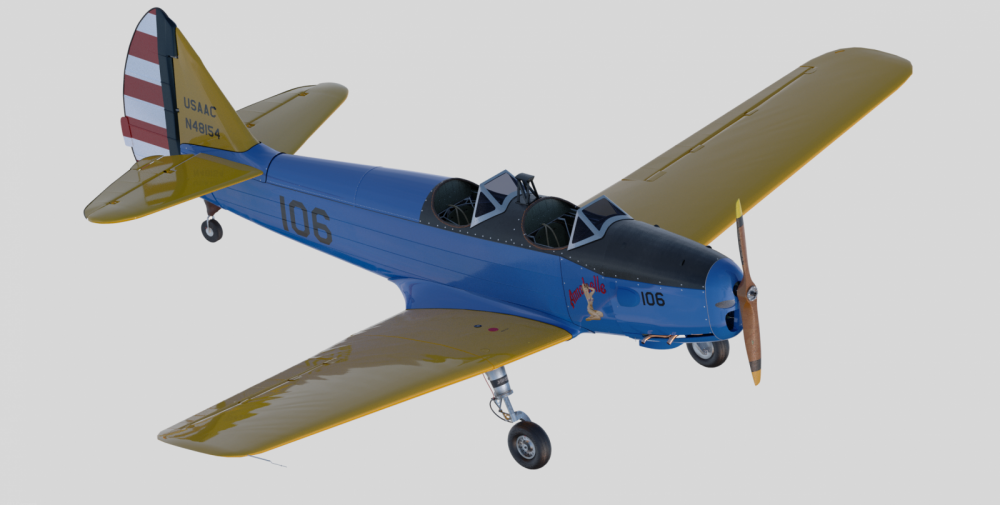 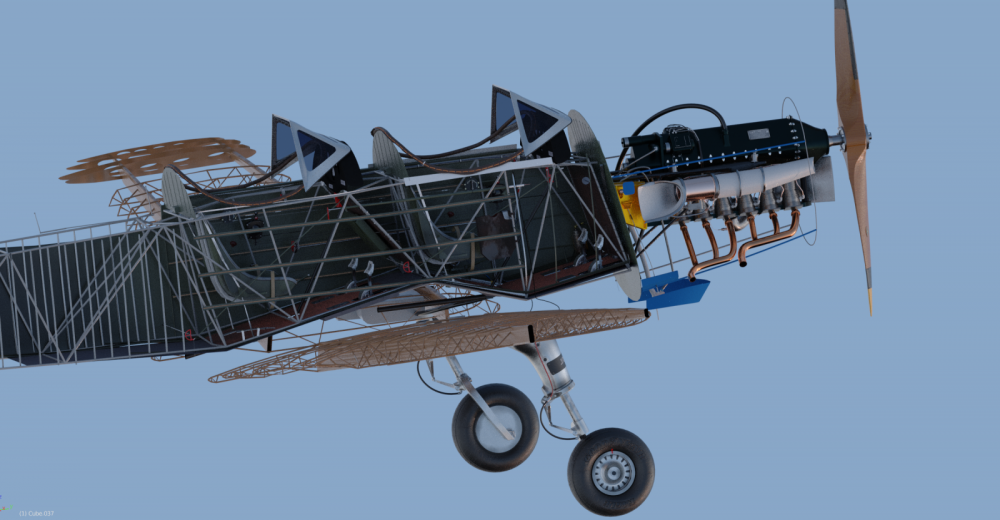 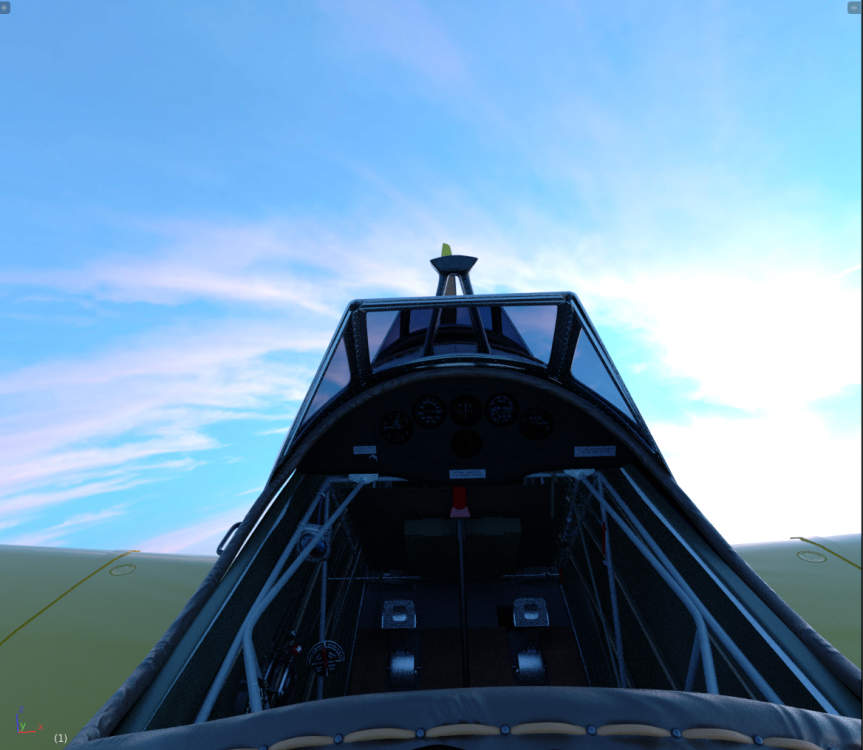 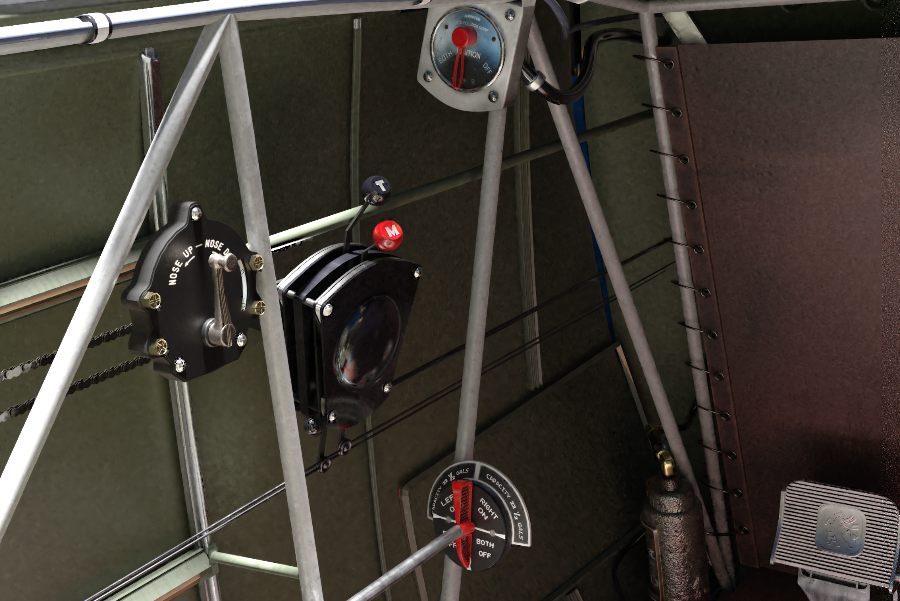 So far we are currently working on animations (of course the whole thing is getting all kinds of animations) and also coding.
No release date as of yet, since i found i’m terrible at estimating this, and i really want to make sure this bird leaves the hangar in perfect conditions with attention to detail screaming all over it.
This project is of paramount importance in order to proceed reviving other legends of wood and steel.
Thank you so much for your attention! We look forward to showing you more and more as work gets done!