It is now about half a year since Microsoft dropped a real bombshell with the announcement of Flight Simulator 2020. Since then, official information has been scattered again and again, but in the community one thing above all: wild speculation. We have now tried to get an overview of what we know about the new Simulator.

Microsoft and the Flight Simulator: This story had a bumpy ride over the last decade and seemed to be finally finished. After FSX was released in 2006, there was only bad news. In 2009 Microsoft closed down the ACES Studios responsible for the development of the simulator series. The desolate attempt to pick up on old successes with a flight game called Microsoft Flight failed miserably. And then: It became quiet.

The software giant then sold the licenses to Lockheed Martin and Dovetail Games. The US armament company then created Prepar3D, something like a FSX successor. The game company Dovetail Games, which had acquired the entertainment license of Microsoft’s Flight Simulator, probably celebrated a financial success with FSX:Steam Edition. The own Flight Simulator attempt Flight Sim World failed as brutally as the flight game Microsoft Flight. 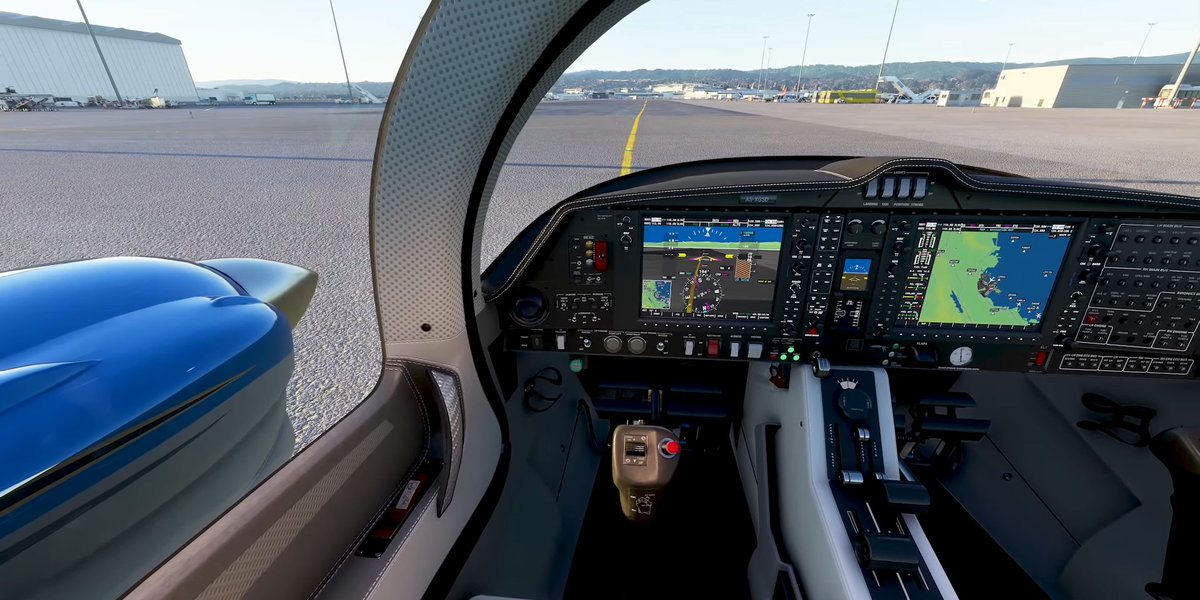 The fact that there’s life in the old dog yet is likely to have been proven once again in June 2019. The software company from Redmond turned the corner with a real surprise: The Microsoft Flight Simulator is set to make a comeback this year.

According to him, the new Flight Simulator goes back to a program called Holo Tour, which could represent parts of the world as a three-dimensional replica for Microsoft’s HoloLens virtual reality glasses. Apparently the result worked best from a bird’s eye view. Thus the idea of a new Flight Simulator was born. Furthermore, new possibilities such as clouds and Big Data were also decisive for the project. Finally, there was again a development team for the new flight simulator, Asobo. Microsoft finally closed down the Aces Studios in 2009.

The Scenery in Microsoft Flight Simulator

One of the most amazing areas of the new Microsoft Flight Simulator will undoubtedly be the landscape. Using an enormous amount of map data from the Microsoft subsidiary Bing, a three-dimensional image of the earth’s surface will be generated in an unprecedented level of detail. For this purpose Asobo uses two petabytes of data, that is an incredible two million gigabytes. This data volume is made up of more than two million cities on earth, global elevation data, roads, individual landscape features and points of interest as well as the more than 45,000 airports around the world. 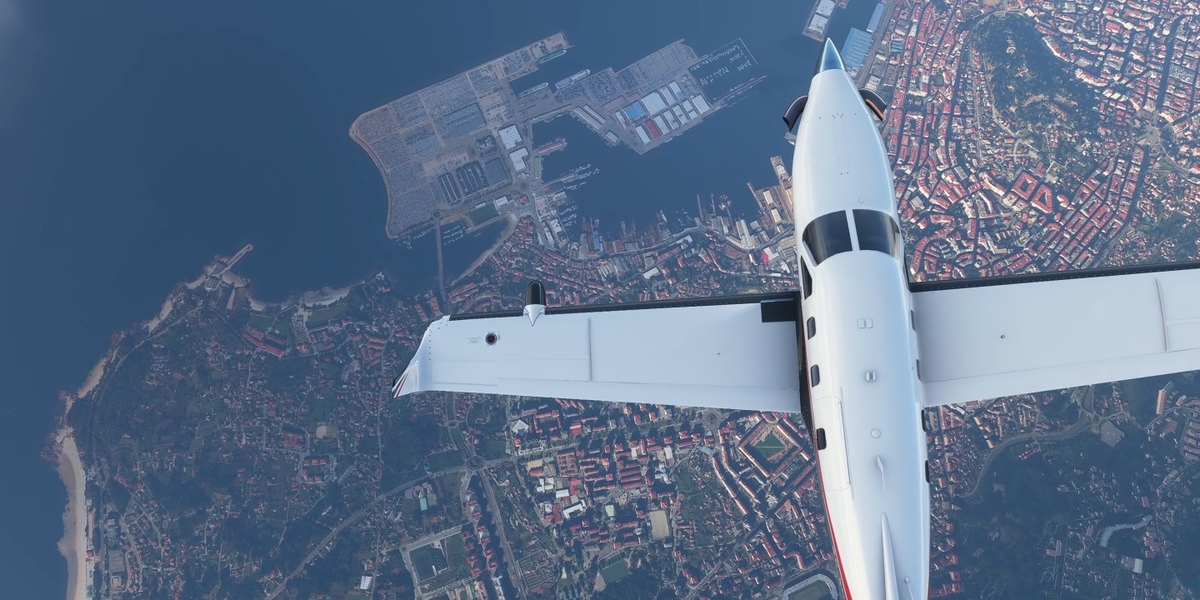 Three different data sources are used. First, there are satellite images with a resolution of 30xm/pixel. In addition there are aerials with a resolution of 5cm/pixel as well as photogrammetry data for more than 400 cities worldwide. The word photogrammetry refers to a process in which, simply put, aerial images are taken from different perspectives and then combined by a computer to form an accurate 3D grid. You can see how this works in this video. 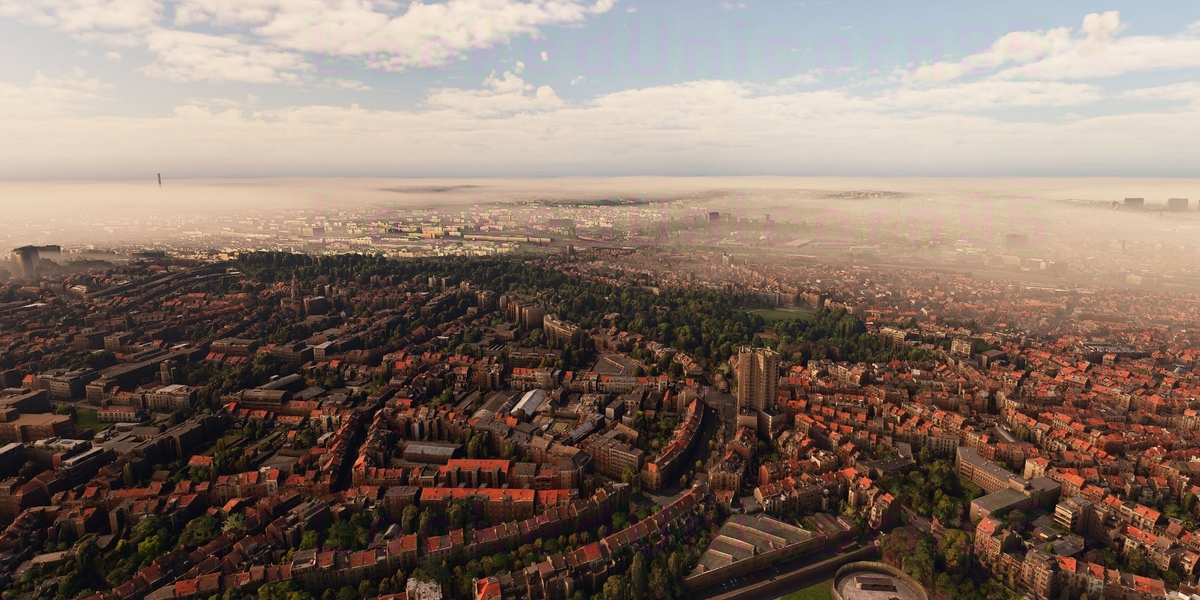 When accurate photogrammetry data is not available, Microsoft generates buildings and trees using artificial intelligence via Azure AI. Even without 3d data, all trees and houses should be in their correct position. One project team member apparently even has a PhD in roof replication, as Jörg Neumann told in an interview for IGN.

Streaming via the Cloud

Due to the enormous amounts of data, one is faced with some very big problems. For one thing, hardly any normal flight simulator customer has the possibility to store so much data at home. And even if they did, it would probably take truckloads of hard disks to bring the simulator in its entirety to the customer’s home. Secondly, the connection to the Azure Cloud alone requires permanent data streaming. And that is also the solution. Microsoft will therefore stream the highly detailed scenery data live into the simulator.

However, since the Internet and its transmission speed is sometimes a thing of the past, the application first checks the quality of the local connection. A better Internet connection will therefore result in a higher level of detail. If you live at an insignificant milk can somewhere in Germany, of all places, the display quality will be accordingly reduced. In addition, there will also be a pure offline version, which will then only have generic ground textures, autogenous buildings, lakes, seas and trees. Those who know well in advance when and where they want to be in the flight simulator should be able to download the data in advance.

Other procedurally created details that are incorporated into the simulator and its landscape are dirt, asphalt, water effects, wind-generated waves, street lighting at night, building details and even three-dimensional grass.

The atmosphere and weather

For the first time, Microsoft Flight Simulator 2020 will also provide a real simulation of the atmosphere. This includes, for example, a completely newly developed weather engine. Here, up to 32 cloud layers are displayed. These apparently extend from the sea surface to the tropopause. Jörg Neumann said about this in an interview: “We have data up to 65,000 feet With this system it should be possible to display all types of clouds that exist in reality. These should then also be influenced by atmospheric conditions, for example by winds. 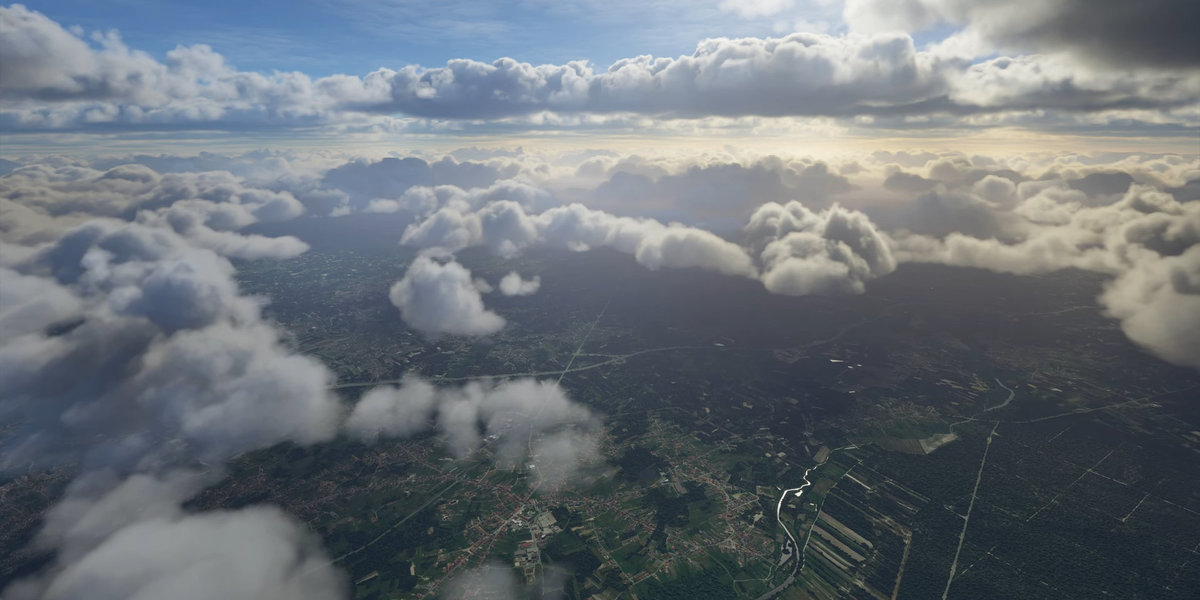 The atmosphere and clouds in the upcoming Microsoft Flight Simulator 2020.

Besides the clouds there will be volumetric rain as well as rainbows. A lot of effort has even been put into making raindrops and their behaviour on the windows of the aircraft as realistic as possible according to the speed of flight.

The weather will be supplemented by light sources, all of which are connected to each other. Whether sunlight, moonlight, the light of the stars or artificial light coming from the earth’s surface. All of this together should create an authentic look. The rest is done by the position of the sun and the moon, which are each dynamically calculated according to the season and current location on earth. The time of day and the weather should be able to be influenced live during operation. Online synchronisation of the weather should also continue to be possible.

The aerodynamics in Microsoft Flight Simulator

The aerodynamic code of Microsoft Flight Simulator 2020 is from earlier FS versions, but is said to have been greatly improved and in parts newly developed. While FSX calculates the flight model only at a single point in the middle of the aircraft, the new Microsoft Flight Simulator is said to calculate 1,000 points. For example, if the right engine dives into a cloud, the turbulences on the right side will be much stronger than on the left.

Microsoft also promises a realistic simulation of the air flow. Factors such as atmospheric conditions, the surfaces of aircraft and their surfaces, the topography of the landscape (for example mountains), buildings and clouds will be included in the calculation of flight dynamics. Work has also been done on ground physics. For example, the physics engine now allows realistic landing on sloping surfaces. In addition, a reworking of the friction on the aircraft’s tires provides even more realism on a wide variety of surfaces, whether concrete, asphalt or grass. The developers have also implemented visually visible icing effects. 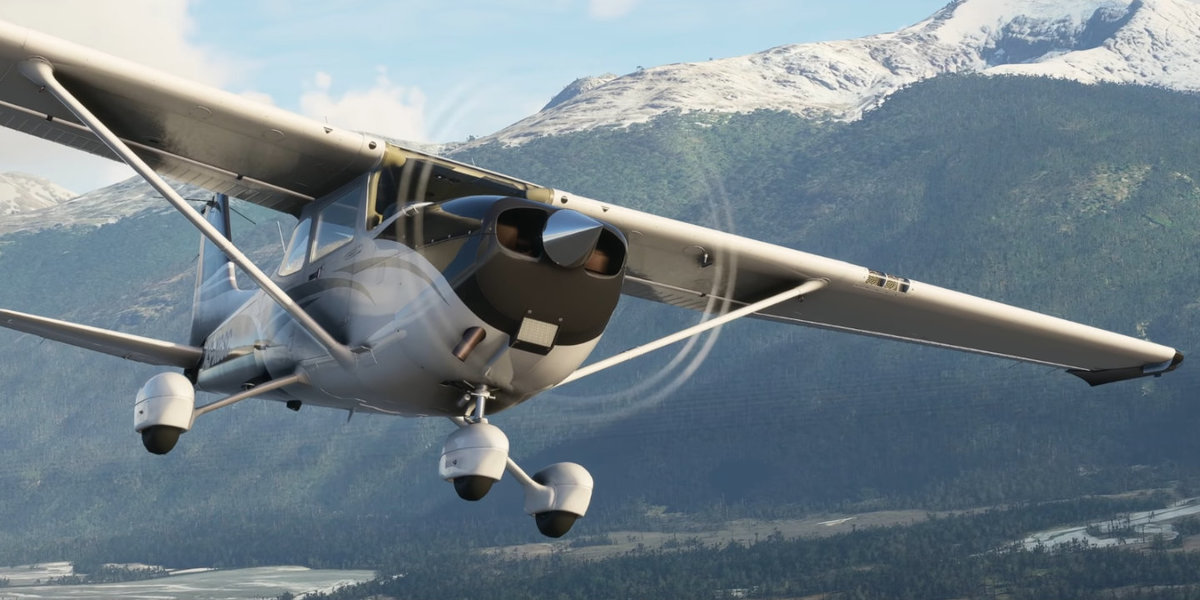 Despite the numerous innovations, the old code from previous simulator versions will remain intact and can be used as desired. According to Sebastian Wloch of Asobo, one does not want to force anyone to switch to the new flight physics. 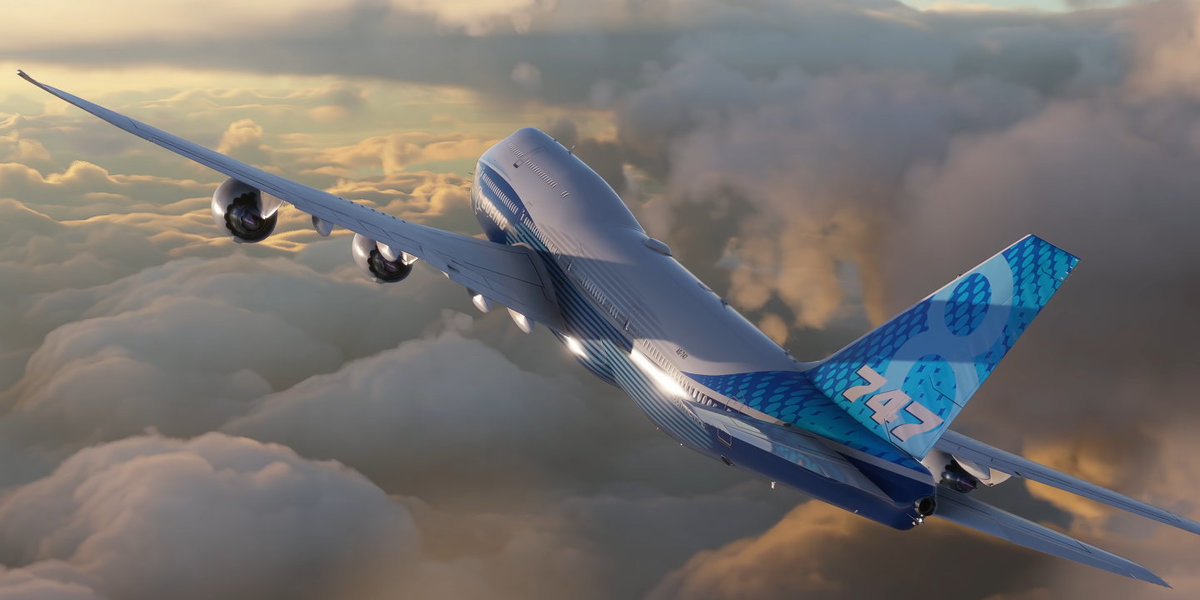 In addition to aircraft with the familiar analogue instruments, there will now also be standard aircraft with a fully-fledged glass cockpit with a functional Synthetic Vision System (SVS). For the display of the glass cockpits Asobo has developed a completely new engine. The cockpit of the TBM 930 is equipped with new touch controllers. According to Jörg Neumann, the Boeing 747-8 also has a working flight computer. Standardized approach and departure procedures (SIDs/STARs) are implemented as well as interactive checklists.

The highest possible compatibility with external hardware should also ensure that even home cockpits can be implemented very easily with the standard version of the flight simulator. In addition, some cockpits were created from laser scans, or the developers had access to 3d data from aircraft manufacturers.

The sound in Microsoft Flight Simulator 2020

Asobo has given Microsoft Flight Simulator 2020 a completely new sound engine based on the Audiokinetic Wwise software. Nevertheless the backwards compatibility to previous Flight Simulator versions should be guaranteed. 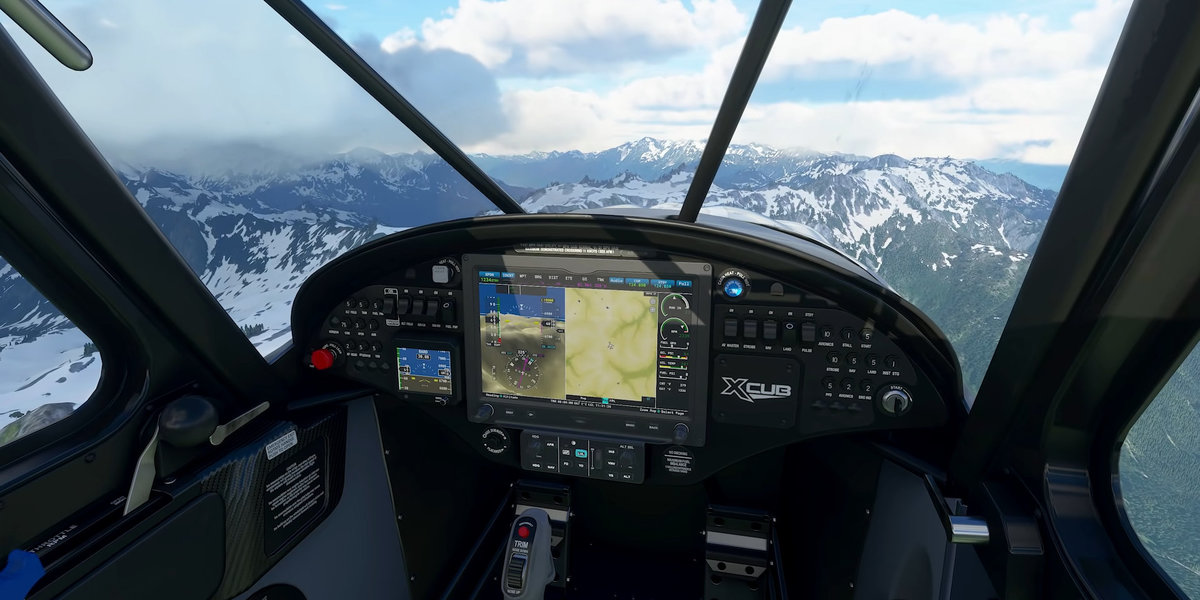 According to the developers, all aircraft sounds are taken from recordings of real aircraft. For this purpose, they have worked together with the manufacturers. The result should be an immersive 3d-sound with 16 channels in total. In addition there are dynamic sound effects, for example when the machine is put on the ground. So if you really knock your plane onto the runway, you shouldn’t be surprised by a loud rumble.

In addition, the movement sounds of the airplanes as well as the hissing of the wind should also be audible. According to Asobo, ambient sounds in the landscape change depending on the time of day and geographical region – the African savannah sounds different from the vast forests of Alaska. This is to be rounded off with dynamic audio systems for rain and storm, as the sounds are linked to various variables for the weather.

Which functions Asobo and Microsoft want to implement in the future is currently unclear. But according to their own statement the developers take the numerous feedbacks from the community to heart. And there the following six points are at the top of the wish list: AI Traffic, Air Traffic Control, Helicopters, Seasons, Shared Cockpit as well as support for Virtual Reality and Track IR.

At least with the seasons something seems to be happening at the moment. On New Year’s Day, Microsoft released a video showing various winter landscapes. Even the roofs of New York City and Paris are turning white, as are the trees in Manhattan.

When Microsoft Flight Simulator 2020 will be available is currently still open. However, some users already have access to the alpha version and can thus test a preliminary version of the simulator. Although Microsoft has not yet commented on the price of the product, an interview with Jörg Neumann in the Argentinean daily newspaper La Nación provides some clues.

There the project manager says that the Microsoft Flight Simulator should be available either as a single purchase or as part of the Xbox Game Pass, a subscription for computer games. What will not be available is a separate subscription only for Flight Simulator. In addition, the Game Pass is not required to access all the features of the product. 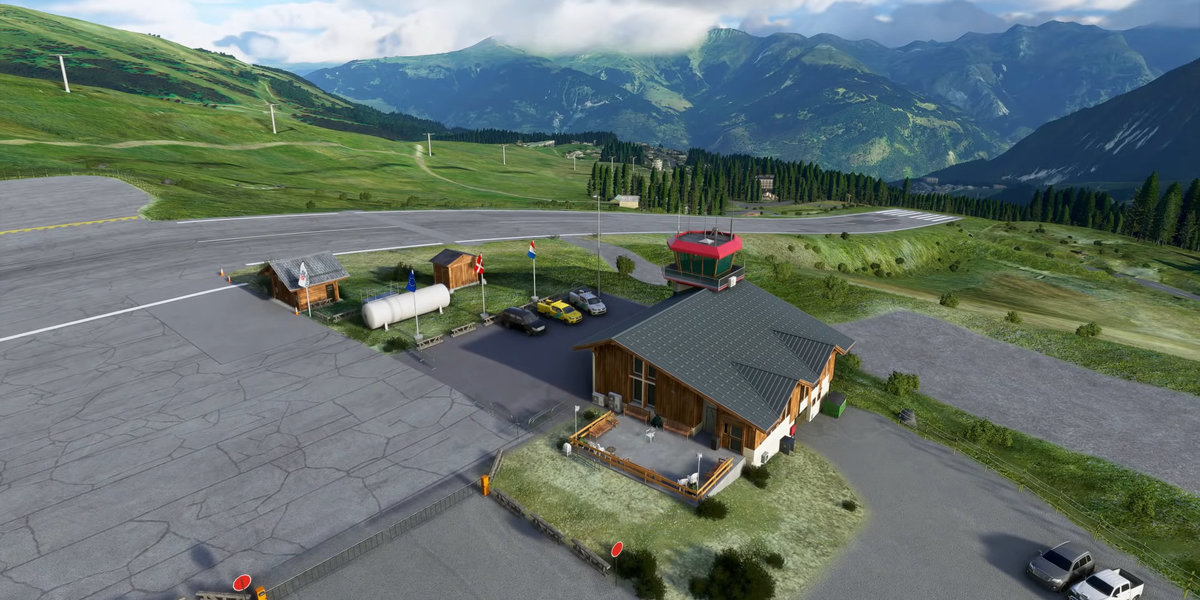 In Courchevel, France, FS2020 will allow you to try out the new feature of landing on sloping plains

Because the scenery in the new Flight Simulator lands on the hard drive at home via streaming, German Flight Simulator pilots in particular are wondering whether their own Internet connection is even sufficient for operation. Here Jörg Neumann gives the all-clear: With a download rate of three to four megabytes per second, a good representation of the world should already be possible.

Those with a rather weak Internet connection can also look forward to continuous improvements in the scenery. Because the new Microsoft Flight Simulator caches its data on the hard disk, the same data does not have to be streamed again when flying over an area again. Instead, the simulator reloads additional details from the cloud.

Even for the highest level of detail nobody should need a modern fiber optic connection. Instead, a download speed of just ten megabytes per second is perfectly adequate, says Jörg Neumann. It remains to be seen how this will look in practice.